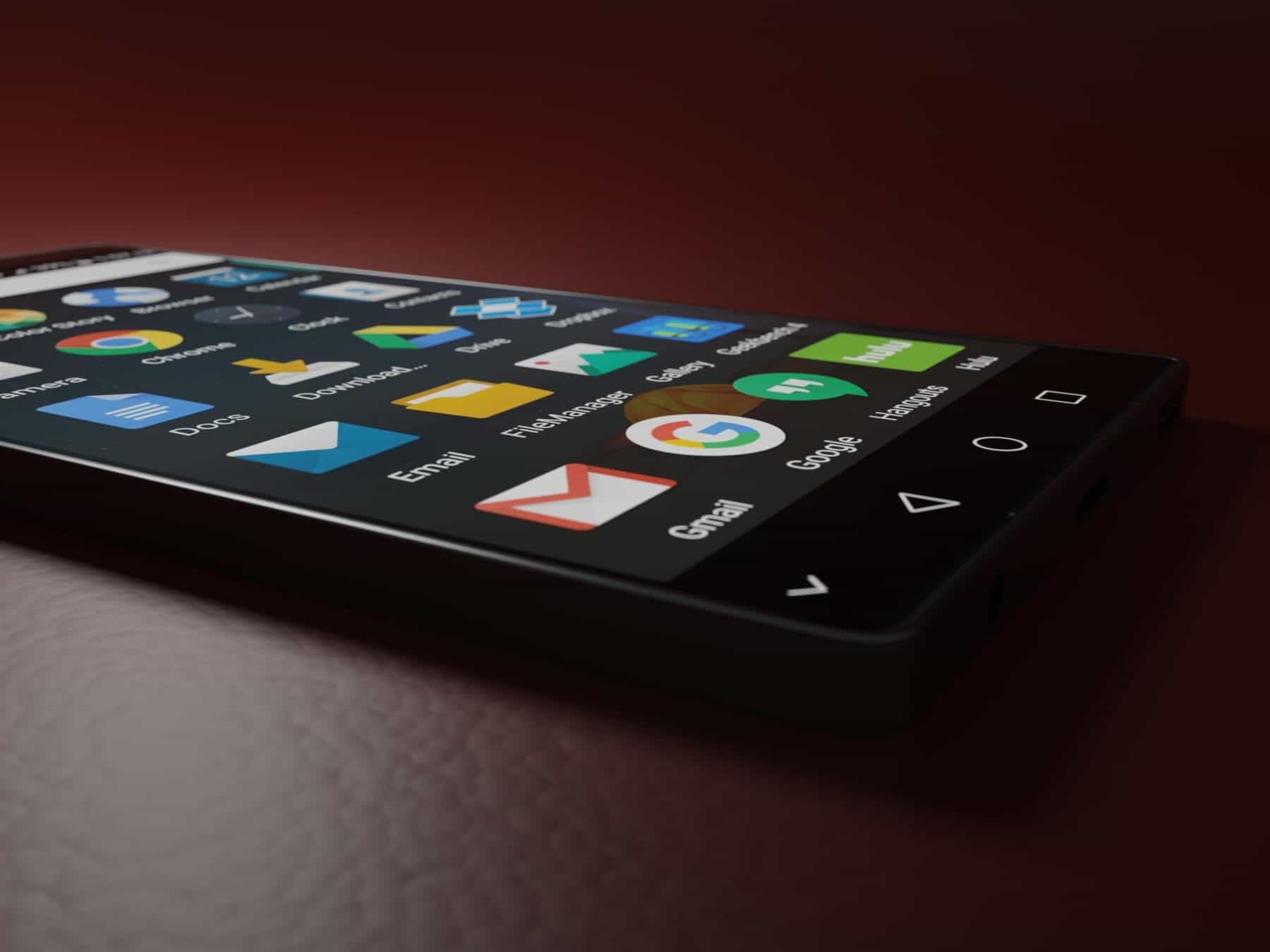 [vc_row][vc_column][vc_column_text]At most recent count, there were 2.0 million apps being offered for download in the Apple App Store and 2.1 million Android apps in the Google Play Store. Combined, these app repositories are used by almost two thirds of all smartphone owners globally every year, and as phones get even smarter, and offer a lot more storage space, that figure will only increase.

This all means that there is a huge market for a great app, but numbers this staggering all also rather scary if you are a developer hoping to get their app noticed. How do you stand out in what is effectively a sea of apps, app icons and app descriptions? In other words how do you get your app to rank high in an app store search?

The key is making use of the latest, and most effective App Store Optimization strategies for the Google Play and iOS App Store. Aka ASO.

What is App Store Optimization?

The one thing that is true of both SEO and ASO is that no one, and we mean no-one, really knows what the real algorithms for ranking in the searches they are trying to become visible really are. Apple and Google Play are as secretive about the most important search ranking factors as Google and Bing are about their SERPS.

Like Google and Bing, the boffins behind app store algorithms do drop hints, and those interested in pursuing ASO do watch trends, patterns and numbers to determine that certain things will affect your App Store rankings more than others. This knowledge becomes ASO and by utilizing it your app could rank higher, be seen by more people, and get more downloads.

Not sure where to start? Here some important basic steps you need to take to take to improve your ASO in both the Apple App Store and Google Play.

Give Your App a Headstart With a Descriptive Title

So, what’s in an app name? A lot, especially when it comes to both user engagement and ASO. A good app name will not only identify what your app does to browsing searchers, but also improve your app store rankings.

Should you use keywords? If possible, yes. Including a keyword or two in your app’s title can help you rank at least 10% higher than if you didn’t include one. It’s a slight complication that both the Apple iOS App Store and Google Play handle titles and keywords a little differently, but in general a keyword certainly can’t hurt in either store.

Here’s how Google Trips includes their main keyword (“Travel Planner”) in their app title to improve rankings in the Google Play store (yes, it’s so competitive in there that even the Big G has to keep ASO in mind)

In both the Google Play store and the Apple App store all you are allowed is a measly 30 characters for your title, so you have to be very concise. However, because the Google Play description is rather different to that in the Apple App store title keywords are not as important, as we’ll explain next. But, the Apple Store allow one thing that Google does not: a subtitle. It’s therefore not a bad idea to create a short title and then add a subtitle with your keywords in the Apple Store. Doing so will help you both establish market share and improve your ranking, and as you’ll see next, still help your ASO.

As is the case in SEO, keywords are an important factor in ASO. And just like is the case for app titles, how you handle app keywords will need to differ from the Apple App Store to Google Play.

Apple gives you 100 characters to add keywords, which is not a lot (less than a Tweet before the character cap increase) and so your keyword research needs to be good to make the most of what is very limited space.

The Google Play Store however is far more generous. They actually don’t cap you off at all, but then again there is no specific keyword field. Here you have up to 4,000 characters – all searchable – to play with. However, DO NOT be tempted to overdo things. Keyword stuffing in the Play Store will earn you the same penalties keyword stuffing in standard web search engines will.

Before you actually publish your app with the keywords you have selected you will want to do some research to learn about the traffic, difficulty, and demand for those keywords, as well as how many apps are already using it.

Toi do this you should work with an app specific research tool. A standard SEO focused tool is not going to give you great results. Apptweak is a good one, as is AppAnnie.

Keywords with high traffic and a low to moderate number of apps will be best for your ASO. You will also need to take a look at what the top apps are for each keyword to get an idea of what people are looking for when they search for that term. If your app does something completely different than the top apps for that keyword, you may not have as much interest as you’d like. Tools like SensorTower can help you evaluate your keywords and much more.

No matter which of the two app stores you are placing your app in its description is crucial to its overall success. It’s like a little landing page, so you need to treat it as such. If someone is interested enough to have clicked through this far then it’s crucial that the description can close the deal and convince the user to download your app.

In writing such a description you need to stop being its developer for the time being and start thinking like your end users. You know everything about your app, and no doubt have certain key cool things you want to point out. But most users will know very little about it, so you have to think like them.

The best app descriptions – for either store – should therefore answer all of the following questions:

Be persuasive yet succinct. Save the more extensive write-up and how-to guide for your app’s website, or in-app onboarding process.

Visually, you’ll need to include useful visuals and screenshots that look good and are relevant to what your potential customers are looking for. These should showcase the key parts of your app, making it look enticing to encourage downloads and, in turn, boost ranking.

A good example of how to create visuals that represent the benefits of your app can be seen in Sleep as Android‘s app page: 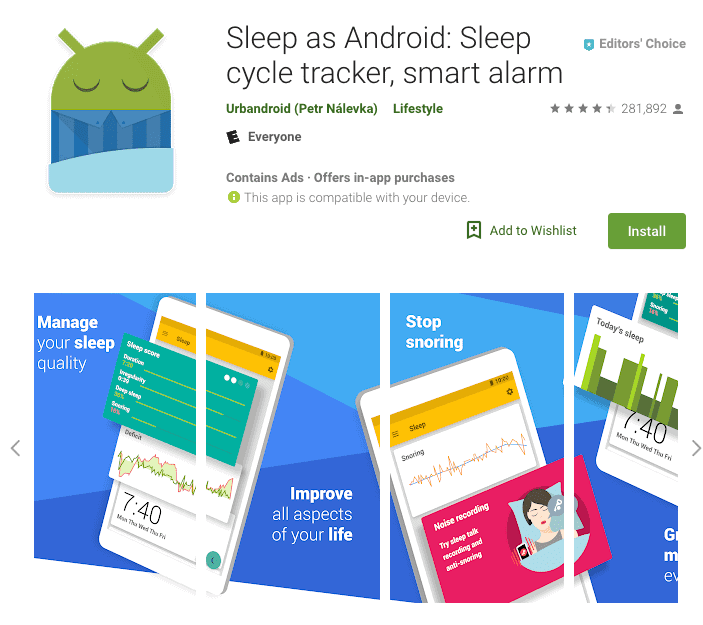 See how they highlight the key benefits of using the app alongside screenshots of the app itself? This should help improve your conversion rate considerably.

Oh, and make sure those screenshots are HIGH QUALITY. People, on average, take 5-7 seconds to decide if they are actually going to download the app they just read about, so great imagery is almost always going to help sway that decision.

85% of the worldwide internet audience watches videos online at least sometimes, and close to half of that content is now consumed on mobile. You can harness the power of video for your app to give prospective users a better insight into what it can offer them.

When making such a video, some people will not have audio turned up. Therefore you need to add text overlays to explain the sections or features that you’re showcasing. And don’t bother with fancy little demonstrations of people using your app. That’s so 2009, no one cares anymore, they want to see what the app does, and that’s it. Here’s a good example of an app preview video that works really well, for a practical app that does not even have a lot of fancy imagery:

Put Your App in the Right Category

Placing your app in the proper category on both the Apple App Store and on Google Play is not only helpful for users who are browsing apps by category, but it is also best practice for helping your app to rank well.

If you feel like your app fits into more than one category, there are 3 ways to approach the problem:

It’s also important to remember that putting your app in a category that’s wrong can lead to trouble. Apple reviews all submitted apps before publishing them to the App Store, and adding your app to the wrong category for App Store Optimization purposes will probably mean it gets rejected.

As for Google Play, users can report violations for review. If you have a major error, like adding sports app in the beauty category, because it seemed easier to rank for, it’s only a matter of time before someone points that out.

Your Icon is Everything

Knowing how to design an engaging app icon is hugely important. You only get one tiny little image to show app store audiences why your app is worth their time for consideration, so choose carefully!

If possible test several different icons before launch. Just because you love the icon that is first choice does not mean that your target audience will. And make sure that you own ALL the rights to any imagery you do use.

For example, if you have an app that relates to a licensed character – and there are a lot of those – don’t make the mistake of ‘borrowing’ any of the official imagery without permission. Even if it somehow slips past the approval process it’s likely to be discovered quickly and you’ll not only get the boot from the app stores but could end up looking at a lawsuit as well.

Why is the icon so important? You could argue the injustice of judging a book by its cover (or an app by its icon), sbut at the end of the day, that’s what most people do, so yours has to be good!

Great ratings and reviews, both in terms of quality and quantity, have a huge impact on your App Store Optimization efforts. It’s in your best interest to get as many as you can. There are a number of ways to do this; in app pop-ups, in app incentives (just be careful that they do not violate the review policies of either store) word of mouth, social media promotion and more. However you do it though, reviews are a very important ASO ranking factor so you need to put time and effort into getting them.

Got some bad reviews? Answer them, and in as positive a way as you can. Users do appreciate when developers are responsive and listen to their concerns, so a bad review can actually turn into a big plus. This video, from Apple themselves, features some successful developers who have made reviews, good and bad, their best friends.

Yes, you should watch your ASO analytics as closely as you would SEO analytics for your website. There are some great tools out there for doing that, including all of the following:

You should also act on these analytics to help you reevaluate your ASO campaign on a regular basis. App users blow hot and cold. They are fickle and they often follow trends. Keep tweaking your ASO and you’ll give you app a much better chance of not only getting downloaded but also remaining on the user’s phone.

These are just the basics of ASO. Like SEO this is an ever changing discipline. Search algorithms change. Best practices change (especially as smartphones keep evolving) If you are serious about your app, making the investment in help with your App Store Optimization from ASO experts could be one of the best investments in it you make.[/vc_column_text][/vc_column][/vc_row][vc_row height=”auto”][vc_column][us_btn text=”ASO Services” link=”url:https%3A%2F%2Fpearllemon.com%2Fapp-store-optimisation%2F||target:%20_blank|” align=”center”][/vc_column][/vc_row]