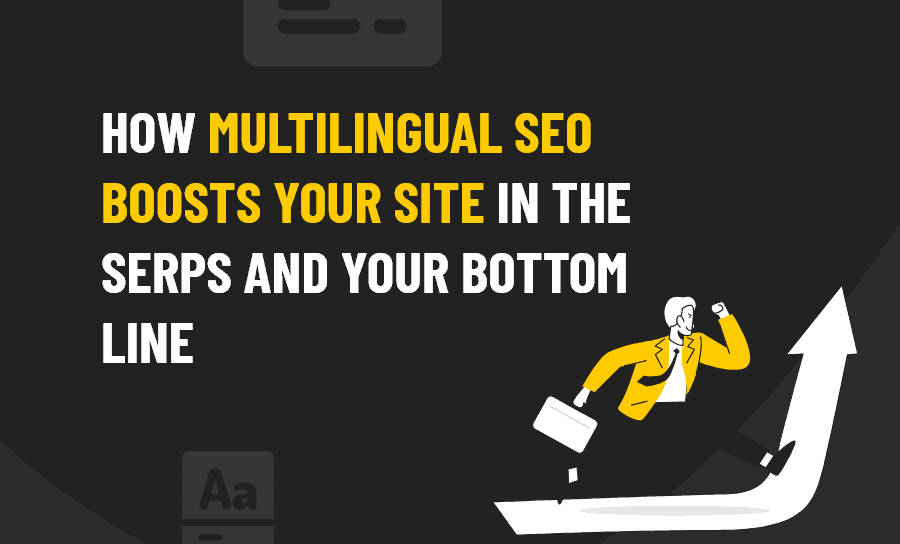 There are lots of reasons to consider translating the text on your website. Doing so increases your potential audience, can boost conversions and makes your site more accessible. But these are only the basic benefits, there are more.

Did you know that creating a multilingual site will help boost your SEO efforts? You’ll need some guidance on how to do so the right way, but if everything is implemented correctly translating your site into other languages will improve your website’s standing in the SERPs as well as your reputation with your audience.

In this article, I’m going to explain how you could improve your SEO by making your site multilingual.

The Basic Benefits of a Multilingual Site

If your website is an English only site it is hardly in the minority. More than half of the websites on the Internet are. Which is rather shocking, as half the world does not speak English. Some will point to the fact that English is the most commonly used language among Internet users, but isn’t that really only because other native tongues are poorly catered to?

For example, nearly a billion Internet users speak Chinese as their primary language. Yet only 2% of the sites on the web are offered in Chinese. By the same token, only 5% of websites offer content in Spanish and yet it’s the native tongue of 500 million internet users across Europe, North America, South America and the Caribbean.

Basically it seems that many site owners just focus on the most popular language among users and skip over the vast numbers who don’t otherwise speak English. Even, in many instances, if they know that non native English speakers make up an important sector of their audience.

There are plenty of benefits to stepping outside of this narrow mindset and opting for a multilingual site. For example you can:

Considering the numbers and statistics I just mentioned, this one is rather obvious. There are billions of Internet users out there who don’t speak English as a first language. For many businesses, catering to them opens up a new, untapped audience and possible new sources of revenue.

Many businesses, especially ecommerce and service businesses, already know that some of their target audience are not native English speakers. For example, those operating in very diverse areas of large cities all over the world know that their customer/client/patient base is likely to comprise people who speak several different languages.

If a business then translates their web content into several languages to better serve their audience, they almost instantly gain an advantage over competitors that do not. If users can read your content in their own language, then this is likely to increase trust, leading to increased conversions and greater customer loyalty.

Going back to the beginning of my article, you’ll remember that I mentioned the fact that making your site multilingual could actually also help it rank better in search engines. Let’s look at why this is.

Translated Versions of Your Site Improve Its Overall SEO Juice

The easiest way to explain this benefit is to offer a hypothetical example.

Let’s say you own a site called example.com. Your company sells clothing to countries across Europe and to consumers in North America (as many ecommerce companies now do.)

To better serve you target audience you translate your site from English into French, Spanish, Portuguese and Russian. Each translated version of the content gets its own unique URL. This can be achieved by either using a separate domain name for each – example.fr perhaps – or, more simply, by making use of use a sub-domain or subdirectory, such as example.com/en/ and example.com/fr/.

Whatever way you choose to implement this -and the latter is much easier – Google and other search engine bots will read both versions as parts of the same site. This means any traffic you get from the various different versions will improve the search engine ranking for the whole site. It also helps search engines better understand your site, as it’s clear which languages you’re providing the content in.

To make all of this work as it should for multilingual SEO, you will need to avoid a translation solution that places all languages on the same page, or uses a # symbol in your address or cookies to determine the language. These methods will negate the SEO boost that a multilingual site can offer, so make sure you structure your translated versions correctly as per Google’s multilingual SEO best practices.

You Can Implement Improved Location Targeting

While a multilingual site will help you to reach a wider international – or a wider ethnic – audience, you still need to understand exactly who you want to target. One important aspect of this is performing keyword research for each of the languages you intend to use.

This can be a much harder part of your efforts to create better multilingual SEO and you may benefit from hiring an SEO team to help you at this point. An experienced multilingual SEO team can conduct the targeted keyword research you need to properly determine which countries and/or languages to aim for.

In order to get the most out of your work, you should also aim to create a multilingual SEO strategy. This will help to ensure users from the locations you want find the right version of your site. For example, it’s not much use to translate your site into French if those within the country see the Spanish version instead.

This last point may seem rather obvious, but it’s worth mentioning as it’s ultimately one of the key factors in any successful SEO strategy. Search engines value quality content and user engagement. If you provide content that drives traffic, Google will notice and rank your site higher as a result.

If you provide content in various languages, driving traffic from specific locations all around the world, or from several different ethnic communities, it will be noticed. Google looks for sites that provide the best possible user experiences. Ensuring your site provides value to your visitors, regardless of language, will help you see improved SEO results.

The Problem With Google Translate

Some people believe that they can add a Google Translate widget or plugin to their site and that will do, in terms of multilingual SEO, But that is far from the case.

Firstly, doing so will not create the additional SEO boosting URLs I mentioned earlier. All it will do is refresh the existing page in a ‘translated by Googlebot’ form. And that is where an even bigger problem arises.

Google Translate is OK. It’s definitely better than it was just five years ago. But does it ever create a translation that a native speaker would consider accurate, or even understandable? Very rarely.

Google Translate is fine for lending you a helping hand if you are trying to order a beer or find a bathroom in a foreign country, but for anything more than that it can be wildly – and sometimes even hilariously inaccurate.

Taking the time to translate your site manually will almost certainly incur greater expense. However, if you serve – or want to serve – a multilingual audience its a must.

One of the great strengths of Pearl Lemon as a company is that we have a staff that is comprised of professionals from all over the world. One of the many things that this has allowed us to do is build a multilingual SEO team that can work in a number of different languages and also understands the nuances of several different cultures. Combine that with a strong knowledge of both standard and multilingual SEO best practices and you have a team that is hard to beat when it comes to global SEO.